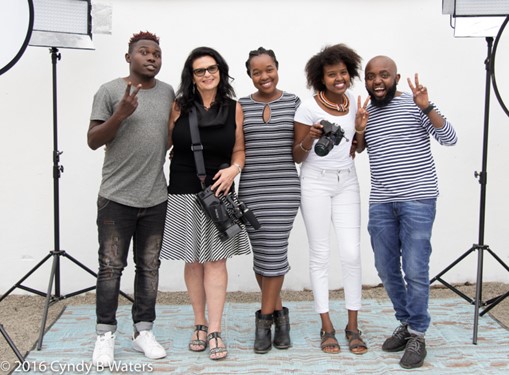 Covered in Mud at the David Sheldrick Wildlife

Trust after playing with my elephant baby.

Our family sponsors 6 elephants at a variety of ages.

who have been in our music and video productions.

The LeConte Photographic Society is proud to host Cyndy B. Waters for a program “My Slice of Africa” on Sat., Jan. 21st at the King Library in Sevierville at 10:00 a.m.  This will be a very interesting photo program and it is free and open to the public.  This is not a library sponsored event.  Please read on for the fascinating bio of Cyndy Waters and also information on what she will be discussing.

Cyndy B. Waters was born and grew up in Sevierville Tennessee.  She enjoyed an interesting mix of life in a small town hanging out at the familyʼs business, Temple Milling Co., where every sort of person gathered on weekends, and life in the big city, when her father worked in Washington DC during the Nixon Administration.  Cyndy was exposed to many types of people as both of her parents were involved in various projects and activities. Growing up in the Smoky Mountains was filled with hiking and adventures, and she always loved to see and experience new things.  Cyndy began taking photographs in Girl Scouts when her Grandmother gave her a 120 film,

green Girl Scout Camera. Later she found the Instamatic camera easier and wore out many of them while in elementary school. By the time she was in High School, she was very serious about photography.

Long time family friend, Senator Howard Baker, and her father helped set up her first darkroom in the furnace room between the freezer and heating unit, right next to her bed room.  She always had a love for big families and children.  She started photographing children in problem situations and her B/W photographs became well known.  She often took these children under her wing to try to help better their lives.

Cyndy graduated from The Art Institute of Atlanta with a degree in Photography and for 20 years worked as a professional photographer. At one point, she was part of a ten student team back packing thru Europe on a Photographic Safari for an exhibition in Atlanta.

While running a studio in Atlanta, she was hired as a photographer for the State of Tennessee in the department of Tourism and the office of Gov. Lamar Alexander. She photographed across the state along back roads and thru State Parks and the Great Smoky Mountains. She visited countless small towns to photograph local festivals and political events. Cyndy was often sent to photograph the development of the 1982 Worldʼs Fair in Knoxville and accepted a full-time job as one of three official Worldʼs Fair photographers. This was a life changing experience working with heads of states from around the world, presidents, and celebrities from all the countries represented at the Fair.

With a great list of references from the Fair in 1983, Cyndy moved to Washington DC with her cousin Tanda Paine where they operated Paine & Waters Photography specializing in political PR on Capital Hill. She has photographed 5 U.S. Presidents. During this time, Cyndy took her 3rd photographic road trip across the USA. This time she and Tanda were documenting the VISTA program, the domestic version of the Peace Corps, for the USA government.

Growing up in the same home town with Dolly Parton, she also photographed Dolly at many points in her life and while photographing the opening of Dollywood in 1986, Cyndy met a Los Angeles film crew, Johnson/Klein Productions. They invited her to join their production company. She made the move and enjoyed 6 years of working in LA photographing many of the people from the “Woodstock Generation” such Crosby, Stills, Nash & Young, Joni Mitchell, Jackson Browne, Woopie Goldberg and many other celebs.

In 1993, Cyndy moved back to Tennessee and soon revisited the Spiritual calling God had placed on her life as a teenager. This time the call was clear to go to Africa and serve as a missionary.  She had originally accepted that calling as a 13 year old. But, in 1994, God’s calling to Africa exceeded all other precedents in her life and she was ready to be obedient.  Cyndy traveled to Kenya with First Baptist Church Sevierville and helped to plant a small church in a tiny workers community called Orbit in 1995. Entering the Orbit village, Cyndy knew she had reached where she belonged. The dirty, dusty rock quarry environment certainly was not what she would have expected or chosen as a place to spend most of the rest of her life, but 21 years later, that calling has never wavered. Her desire to help children was able to move from behind and thru her lenses to real hands of actions.

She is founder and CEO of the Orbit Village Project Inc. The project runs a 500 student school, an orphanage, large family feeding program, and 3 churches. In 2009, she was honored in a book called “WALKING THE TALK” a story of 9 women who stepped up and stepped out to help the 300,000 internally displaced people living in camps throughout Kenya after the 2007 post-election violence. This work grew into what is now a large project in the Mathare Valley and is currently developing into a center for the same people who were displaced to rebuild their lives with employment and rehabilitation.

Cyndy has adopted 3 Kenyan children, Muteyi 26, Nangesian & Judy, both 20. She is still a photographer, taking 1000ʼs of photographs every year of the children, and she is blessed to get to go on many African safaris and photograph the fabulous Kenyan wildlife and landscape. She uses her photographs mostly to document the project for newsletters and their webpage www.orbitvillage.org and as collectible art.

The third church in Naiborkeju, Kenya is within the Samburu community home of her daughter, Nangesian. These are amazing people and photographing their life style and being accepted into their family has opened up a new chapter in Cyndy’s African Photography. Getting to photograph the Samburu people, a Maasai tribe, is uncommon.

In February, she will travel back there with photographer friend from her earlier job at the State of Tennessee, Debbie Chessor, and after they teach a photograph class at Orbit School of the Cross they will spend a week in Naiborkeju. They will start a Reading and English program for the community and will photograph each member of this family and near-by tribe members.

For the past year, Cyndy has been developing a lighting/outdoor studio kit to use while

photographing these stunning people. The remote area has no electricity and the Samburu dwell in small mud homes, lit by one very tiny window. The area in general has beautiful light in the morning and early evening but harsh lighting with precious little shade, during the day.

Cyndy is known as Mama Orbit in Kenya. Last year she organized Mama Orbit Productions to help develop and bring to the public’s attention the talents of kids from Orbit School of the Cross. The goal is to have a performing arts program for kids of all ages exposing them to various forms or art, photography, media and music.  So far they have produced two Kenyan Gospel music videos, EVERYWAY, with artist Hopekid, and WOTE with top Gospel duo Kelele Takatifu (Joyful Noise).  Both have been popular throughout the industry in Kenyan and recently nominated for awards. You can watch them on You Tube. https://www.youtube.com/watch?v=U0WNW_9rFhY

Africa is a massive continent with so many different tribes and cultures. Cyndy has had the chance to only experience a small part of Kenya but has photographed a wide variety of life there. Her series titled, My Slice of Africa, will be showcased at an event hosted by the LeConte Photographic Society at the King Library in Sevierville on Saturday, January 21, 2017 at 10:00 a.m.

Cyndy photographs life as she finds it.  She is driven by experiencing the reality of people’s lives around the world and photographing these everyday scenes and experiences that many people will only see thru photographs and video.  Hoping that at times, her images will make a positive difference in the lives of those who share their reality with her and trying to encourage others to “use your gifts for good!”

The selection of work will feature photography from the project she has spent the last 21 years of her life developing and images of many of the children within the project. She will show photographs of a changing Kenya that she has shot over the years, her work at a camp for internally displaced people (IDPs) in Mathare after Kenya’s deadly 2007 post-election violence, and the following years deep in the Mathare Valley where nearly one million people live in extreme poverty.  Her photographs will take us far outside of Nairobi and into the lives of the remote and very colorful Samburu tribe which have become family to her.  From the Samburu, her images will transport us deep into the bush on a photographic safari of Kenyans amazing wildlife that she has been blessed to experience over the years.