Last week I finally got the Kayak out on the lake to do some bird shots. Although it was more of a trial run for the Kayak (making sure everything is ship shape), and the car, (Seeing if the kayak would fit on the car).

So I lucked into a nice day, although it may have been too nice, very bright out and unseasonably warm by the time to the lake. At least I didn’t have any storms to face that day though. So after working out mounting the kayak on the car, I headed for Douglas Lake. Actually it was on the Pigeon River near where it meets the French Broad River, kind of the beginning of the lake.

I got to the lake and got the kayak into the water about 11am. Pretty bright by that time, and I took the little camera for this outing. I still have to work out a dry system for the larger camera to fit the kayak. But this area is a wetlands area and a little bit of a preserve so the birds were abundant. Herons, Osprey, Ducks, Geese, Anhingas, and many more were out in numbers, along with a couple eagles.

The kayak is great for its stability. None of the worries of leaning to far that you get in a canoe, but in the end you are shooting from a boat that is moving, albeit slowly, from a sitting position. So stabilizing the camera was challenge, even for the small and light Panasonic FZ50 I was using.  I chose this camera as a small fixed lens camera I could keep in the car for mostly landscape shooting. It does okay for that with a nice 28 – 400 35mm equivalent Ziess lens, but I did find myself missing the big rig on this excursion. In order to try to avoid motion blur from the kayak and bird movement, I used an iso 400, which when combined with the maximum zoom produced quite a bit of noise in the images. Also the write speed of the camera is pretty slow, with little buffer, so a lot of images were missed waiting for the camera to write to the sd card, but this mainly a day to play to anyway. I plan to go back with the big rig next week weather permitting, and try to get some serious shots.

The kayak was excellent for getting close to the birds without spooking them too much. Herons are always a challenge of course, but with some quiet drifting I was able to get into position to get some pretty decent shots with a few of the more tolerant herons.

Of course many were spooked as well, so I got a little practice at takeoffs. 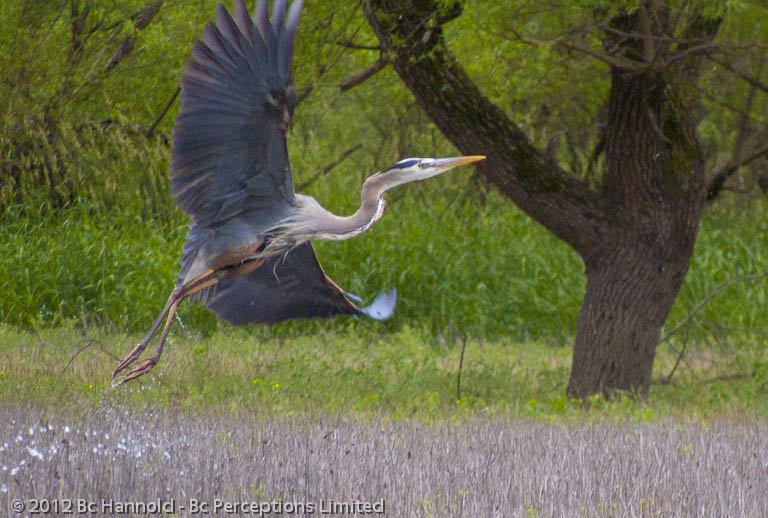 At this point I must through a plug for Lightroom 4. I was very impressed with its ability to clean up noise on these shots. These are pretty severe crops on a 10 mp point and shoot, so all things considered I’ll take em.

The osprey were in abundance. There are a number of nest in the area in old dead trees, a silo, and an old railroad bridge. So there is a lot of opportunity for flight shots, and nest shots if you can get a good angle. Hard to shoot sitting down in kayak, but a great place to try.

Through in a few gossiping geese and all in all, it was a fun day. I can’t wait to get back out there with the bigger rig at a better hour of the day.  While the little camera did a pretty good job, I know I can do a lot better with a rig better designed for this kind of shooting.