Happy Thanksgiving. A great day to share with family and friends. Today I am grateful for natural beauty where I live. To celebrate that I’m sharing a couple of photos I entered in the Leconte Photographic Society competition last month. It is a great camera club with some awesome creative talent. So here are last month’s entries.

I’ll share one of my favorite prayers to celebrate this day. I am grateful for this prayer. If I can remember it, it will bring me through any situation I find myself in.

This is the second photo I entered. This scene can pretty much be shot any time of year, and is always available.

So I hope everyone has a great Thanksgiving.

Any resolutions? I’ve not made any since history has shown that the grand designs imposed on New Years day typically do not work for me. A better approach for me has been using a daily resolution. Simpler and less daunting, but still requires a great deal of effort for the things that really matter. But there are things I want to change, one of them being the amount of time I spend with images, so in that vein here are a couple I took a couple days after Christmas. We had one of the largest snowfalls that I have seen since I’ve been down here. Over the Christmas weekend I believe we had around 9″ of snow, which is a lot for here. So the following Monday I headed out to Greenbrier. Basically all the roads in the park were closed, but Greenbrier is a decent spot to park at and hike in. I chose not to use the cross country skis, as they can be cumbersome and actually slow me down with that much gear. Plus the snow was very soft with an ice base so there would not be much glide using the skis.

I used two approaches for these shots, both from basically the same point. The first is a six shot HDR. I like using the HDR approach to capture a wider range of tones, but also for the dreamlike effect that can be created using it. Sometimes I will try to make the effect very subtle, as to not be noticeable, but other times I am looking for the effect to create an image that will stand out from the many images that were shot there that day. This one was done with six images, varying the shutter speed between exposures from 1.6 sec to 1/20 sec. One of the problems that day was being able to come up with a shutter speed slow enough to give some blur to the water. Even at ISO 50, I was stacking two ND grad filters, adjusted so that the dark area covered the entire lens, and still could not achieve a normal shutter speed of over a second. So the HDR effect helps the blur the water some in the final image. Here the HDR created image, after final tone and saturation adjustments in Lightrooom.

Here is the same shot as a single exposure after tone and color adjustments in Lightroom.

As you can see, the single shot has a bit more contrast and less motion blur than the HDR shot. The sensor does do a great job of capturing the range of tones in single shot though, but I do prefer the HDR image. The best advice I can give is that when you find a spot that you think is visually appealing, shoot it every which way but loose. Its always nice to have a choice when you back home and are going through the images. I spent 1/2 hour to 40 minutes at this spot for these images, and also stopped at the same spot on the way back to capture the following one because I had forgotten to capture it when I was doing the others.

This is a simple two shot pano stitched together in Photoshop. I was going to do a three shot HDR Pano, but my battery failed in the middle of shooting it. I need new batteries for my camera, so in the cold they fail really fast. I do keep them warm by placing them next my body, but once they get into the cold camera they don’t last long. Another trick you can use with a camera pack is to throw a hand warmer in a compartment with the batteries in your pack. You can only do this with a separate compartment! It is important to make sure the camera and lenses stay at ambient air temperature during your shoot. Otherwise you will have fog or ice on the lenses.

On this I did some brush work in lightroom to adjust the saturation in specific areas of the image after the overall tone and color adjustments.

I hope everyone had a Merry Christmas and Happy New Year, if you are so inclined. One of my goals (not resolutions) is to keep the blog updated more frequently, so look for more in the coming year.

Or least the flowers are popping up. The Dogwoods and Redbuds outside the park have had a happy spring, the ones inside the park are not popping yet. We had some cold weather last week that may have slowed them down a bit. I saw very few flowering Dogwoods in the Greenbrier area this Saturday, and only 1 Redbud. The Cosby area had a number of Dogwoods flowering, but it looked like the cold affected them, the blooms did not have the usual white pop to them. Good news for the Trillium though, they are going strong along the Porter Creek Trail. Yellow Trillium are very abundant, and the Large Flower Trillium, and Sweet White Trilliumare plentiful. Pahcelia is blanketing the the forest floor and areas, and if you look close you can find Dutchmans Breeches in full bloom. The Crested Dwarf Iris along this trail have about a week to go, although I heard they are already blooming near the Ramsey’s Cascade trailhead. It looks to be a good year for wild flowers, providing we don’t have any suprises through the spring. Here are a few shots from Saturday. These have not been edited yet but they will give you an idea of what is going on. 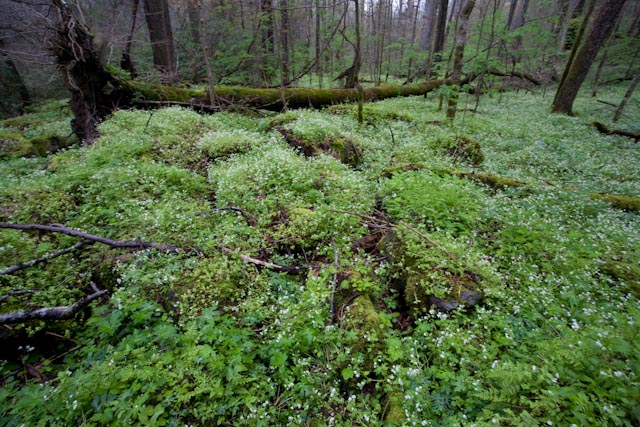 Back to work. Keep on clikin!

I have been remiss again. This post should have been a couple weeks ago.

We are expecting a gorgeous St Patty’s day in Gatlinburg. The parade today is a combination Santa/St Patricks day parade, so I guess we are in for a red, white, and green day.  Should be interesting.

Last Tuesday I hiked up toward Spruce Flats Falls in shorts and a tshirt. The Tuesday before I was shooting in 6″ of snow at about 15 degrees.  Thats the kind of variety I love. The great thing is, that at lower elevations we only had a dusting of snow. Snow you visit and then leave. Thats what I call the perfect snow. 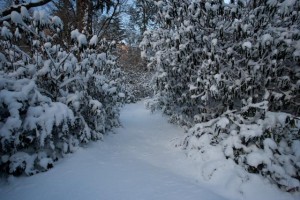 I had to “crab” my way under the rhododendrons, the branches were reaching the ground in places due to the weight of the snow. The cold also meant there where some nice ice formations in the rivers.

All in all I love the variety here.  I was bummed this morning because the fog seemed perfect this morning. But alas I had to come open the shop. I would have loved to be shooting instead. I did snap a couple from the back porch though.

It looks to be a great wild flower show this year. The Barlet Pears and Daffodils are in full bloom, and the Redbuds and Dogwoods are starting to strut their stuff. If we don’t have a late freeze, with the amount of water we have had lately it should be a good year.

That’s all for now, got to go back to work.

Remember, today is important because I am trading a day of life for it.